Bringing the 1984 Olympic Spirit to the Games 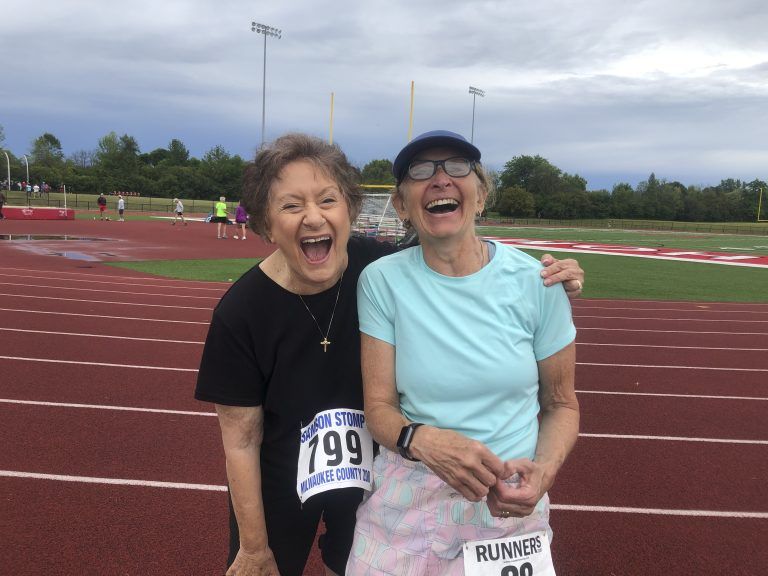 Our athlete story reminds us to keep our spirits up during the COVID shutdown!

Meet Sandy Witt, a great-grandma, former Olympic torch carrier, and Wisconsin Senior Olympics athlete and volunteer. Sandy always has a smile for everyone she meets.

Back in the late 1970s, Sandy, mother to five children, found herself facing an empty nest and looking for something to do. She began working for Weight Watchers and became a group leader where she helped others start healthy habits.

“I liked being around people who exercise, because they are some of the most positive people I’ve met,” Sandy explained. “There’s something about people who train, they just seem to enjoy life a lot!”

Some of her friends worked out running as well so she began running at the YMCA on 124th Street. Not long after, she began completing triathlons.

Sandy read about an opportunity to run with the Olympic torch for the 1984 Summer Olympics. She completed the application and was thrilled to be chosen to carry the torch for one mile on its journey to Los Angeles. Her part of the run took place in Missouri. “It was a dream come true!” she said. Her husband, son and daughter-in-law who was pregnant at the time, drove down to St. Louis. For one mile, Sandy ran with the torch carrying the flame on its journey before handing it off to the next person. 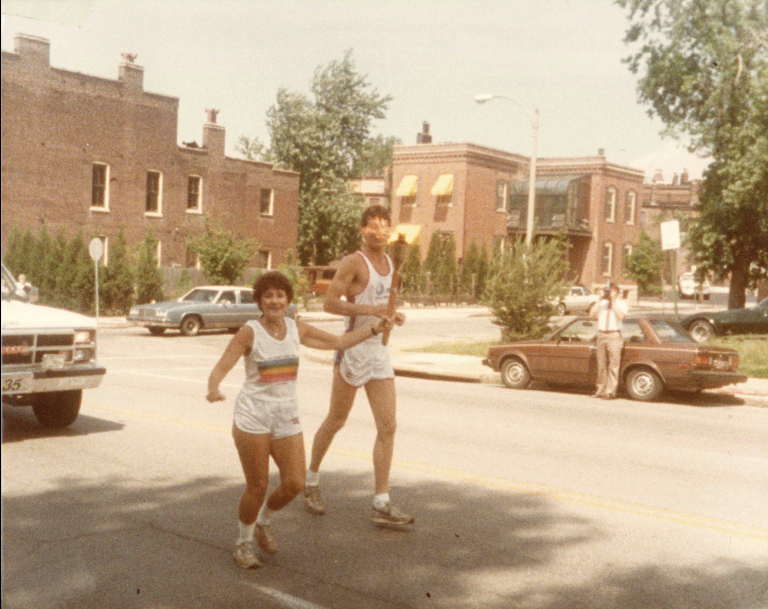 For her efforts, Sandy was able to keep the torch after the flame was passed on. What an amazing keepsake! She has enjoyed over the years sharing the torch with others.

Time passed since her amazing experience with the 1984 Summer Olympics. Fast forward to four years ago, and Sandy brought her torch to a Wisconsin Senior Olympics Event featuring Bonnie Blair (see photo above) and author and international speaker Gloria Boileau. That’s when Sandy began volunteering with the organization bringing along her torch to share with all. 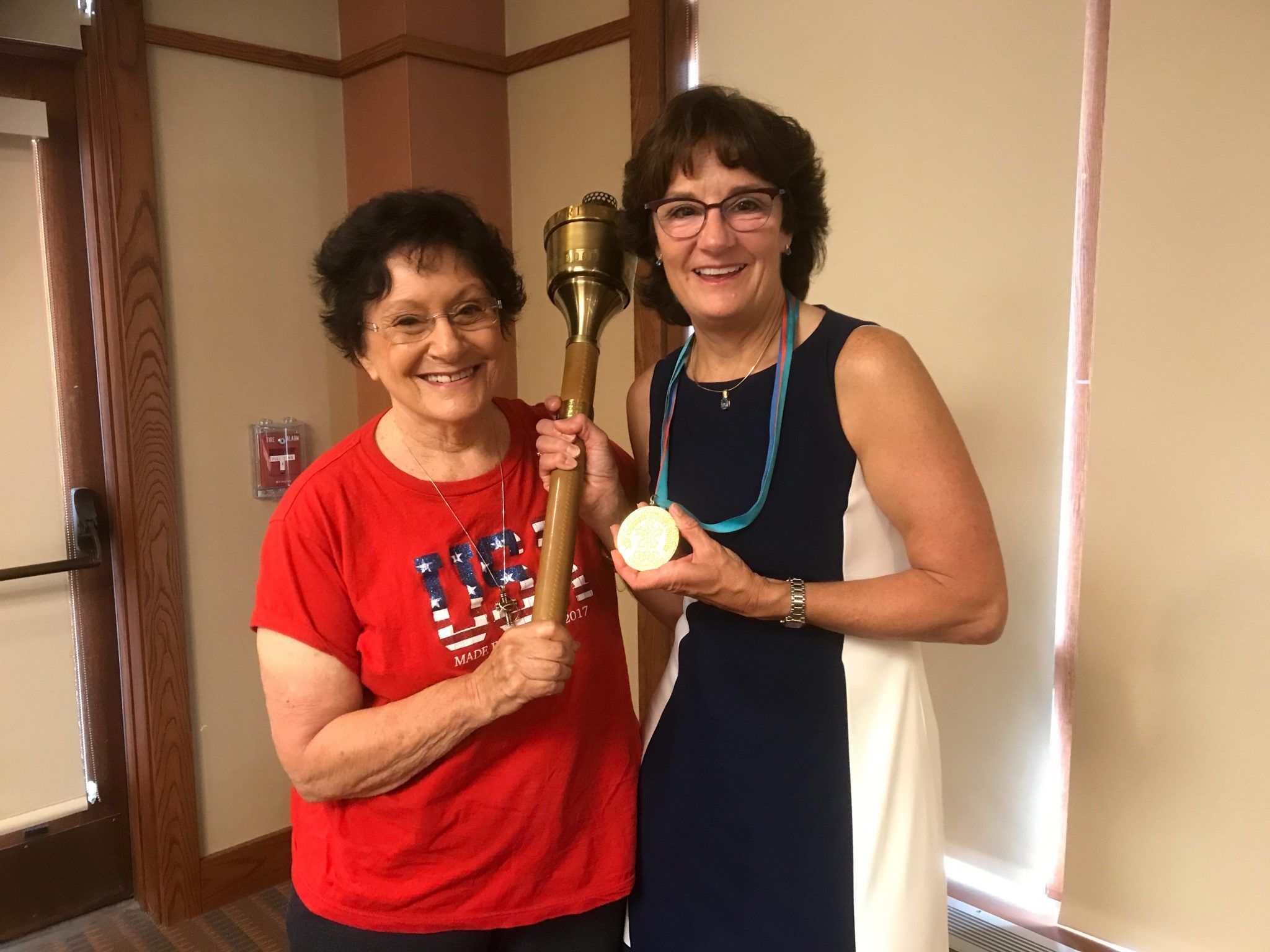 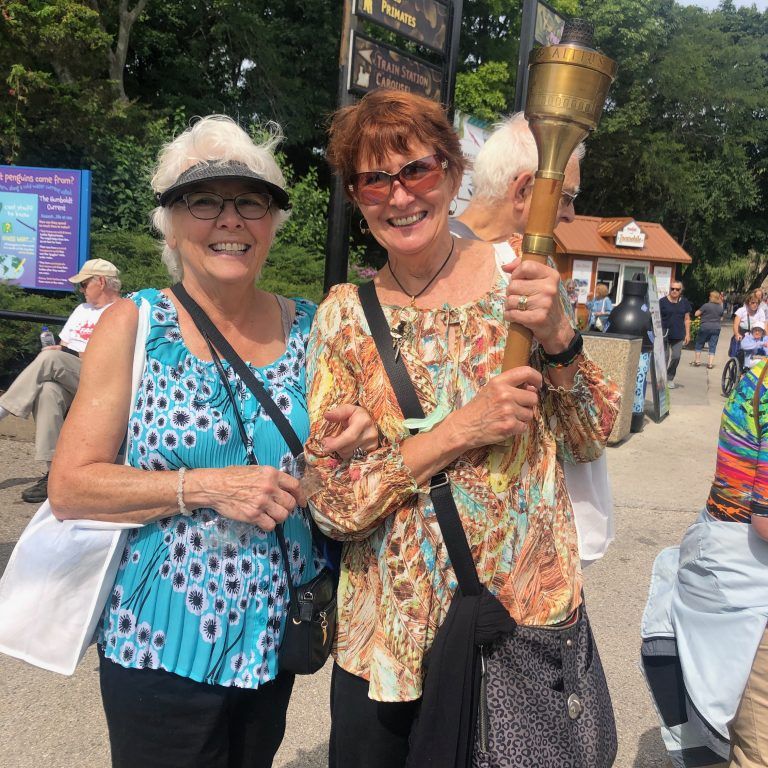 Since then, Sandy and her torch have attended every Senior Fest Zoo Celebration for the WSO annual one mile walk. Hundreds of our athletes and supporters have carried the torch around the Zoo and, last year, at The Olympian 5K/10K.

Sandy stated, “I always wanted to share the torch with others especially because I really love to see the joy people have when they hold it.” Sandy has been at numerous events for the WSO giving people the opportunity to carry the torch. At one running event, she heard a 5K runner tell her granddaughter, “You are holding a piece of history,” and Sandy’s heart just melted.

Sandy enjoyed helping spread the word about the Wisconsin Senior Olympics and sharing her torch. Through this all, she put her running shoes back on and got back on the track. During last year’s games, Sandy competed in Race Walk at the WSO’s Track event, earning a gold medal in her division. Other athletes helped make sure she knew the rules of Race Walk and she loved the experience!

We thank Sandy for letting us share her story and hope you are inspired to get back in the games too!

Labor Day is a day of festivities held in honor of American working people. This special day pays tribute to the contributors and achievements of all American workers.

In this episode, you'll meet Sandy and Neal and learn more about their extensive Track and Field background; acquire specific breakthrough tips and techniques on SHOT PUT and DISCUS and be impacted by their words of wisdom and thoughts about the benefits of competing in the WSO.

Take Charge and Win-Your Path to Victory and the Gold Medal in the Wisconsin Senior Olympics 2020 Let's Claim Victory Together! (Post-Quarantine fitness opportunity in a safe environment)